Etymology is the study of word origins. It is an interesting discipline that brings to you some incredible facts about where and how the word/ words came into being.

This week’s fare is the word Jumbo and the idiom; don’t throw the baby out with the bathwater.

Photo by Bisakha Datta on Unsplash 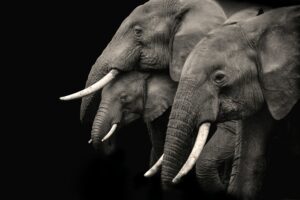 In 1861, a two-year-old calf was captured by a tribe of Arabian hunters in the plains of Ethiopia, on what may have been the banks of the Settite River.  Later, this two-year-old 40-inch calf went on to become an 11.6 foot 6.5-ton bull and was first known as “Children’s Giant Pet”.

Purchased by animal collector Johann Schmidt, he was resold to the menagerie at the Jardin des Plantes in Paris.  He was called Jumbo, a combination of jumbe, a Swahili word for chief, and Jambo meaning hello.

In 1865, the Jardin des Plantes traded the young Jumbo to the Royal Zoological Society in London where Regent Park zookeeper Matthew Scott saw hope for Jumbo.  Under Scott’s care, he flourished.  By age seven, Jumbo’s daily intake included 200 pounds of hay, 1 barrel of potatoes, 2 bushels of oats, 15 loaves of bread, a slew of onions, and several pails of water.  He consumed a gallon or two of whiskey per day when Scott felt health concerns warranted it.

In 1880, P.T. Barnum was looking for a magnificent animal to add to his circus, “The Greatest Show on Earth”, with co-partners James Bailey and James Hutchinson.  That same year, Barnum purchased Jumbo from the Royal Zoological Society in London.  The question still lingers why the Park Superintendent A.D. Bartlett decided to part with Jumbo.  Maybe it was the hefty $10,000 offered by Barnum that swayed him.  Despite widespread protests and legal attempts to invalidate Jumbo’s sale, Barnum reigned victorious in 1882.

African elephant habitat has declined by over 50% since 1979, while Asian elephants are now restricted to just 15% of their original range. Besides poaching, a recent study in Gabon showed that over a 30-year period, the amount of fruit available to African Forest Elephants dropped by more than 80% due to climate change affecting the trees. This results in a measurable loss of elephant body condition. This, in turn, could potentially lead to lower reproductive rates and less overall seed dispersal by the elephants, resulting in a vicious cycle of diminishing elephant health, declining elephant numbers, and a reduction in the quality of their own forest habitats as their food trees become ever rarer. We have a similar phenomenon occurring across the forested tropics of Africa and Asia.  More we poach elephants for their ivory and poach their habitat, the man-animal conflict is likely to turn worse.

Don’t throw the baby out with the bathwater.

The meaning of the above phrase is not to discard anything valuable along with something undesirable.

The origin of the phrase is attributed to the concept of sharing bathwater.  It is believed that in medieval times, people shared bathwater which was scarce. Starting from the man of the house down to the baby in the order of importance, the same bathwater was used.  Hence, by the time the baby had its turn the water was so murky that the baby was in danger of being thrown out unseen. Of course, people call this explanation hogwash.

A few experts feel, that as early as 1500, the expression was a part of everyday German language (as ‘Schüttet das Kind mit dem Bade aus‘) but didn’t emerge in English until the 19th century. The Scottish philosopher and German scholar Thomas Carlyle was well acquainted with German proverbs and translated them in an essay denouncing slavery entitled Occasional Discourse on the N*gger Question (written in 1849 and published in 1853)

As a continuation of the first reasoning, the belief was that weddings took place in either May or June.  They believe that brides would have smelled more pleasant and carried a bouquet of flowers to hide their body odour. Hence, the custom of carrying a bouquet when walking down the aisle came into existence.

Closer home, the states of Maharashtra, Gujarat, Karnataka, Jharkhand, Andhra Pradesh, and Rajasthan have been facing serious water crises since 2017-2018. According to the Union Ministry of Agriculture, the groundwater level has fallen alarmingly over the years.

It would help us to keep the etymology in mind and if we do not want to bathe in the same water, shut the tap when not in use. Small changes like keeping the tap closed when not in use and ensuring that we take only what we consume at restaurants would help us go that extra glass! Don’t you agree?

Delving into its Historical Mystery- part 1