written by Chandrika R Krishnan January 23, 2022
Etymology is the study of word origins. It is an interesting discipline that brings to you some incredible facts about where and how the word/ words came into being.
The month of January is half-gone and the new year isn’t new anymore!
January is a month that is derived from  Janus. He is the Roman god of beginnings and endings. He is said to preside over doors and gates. Janus is usually depicted with two faces looking backward and forward and that makes it characteristic of a new year.  Motivational speakers do tell us not to dwell in the past but Janus may not have heard of the speakers, just like many of us common folks. 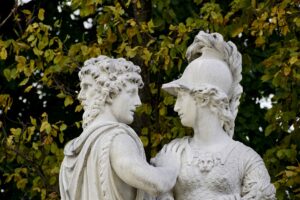 Contronyms are also known as Janus words.  And that makes January, a perfect month for learning about contronyms. So what if it is half-gone? Let’s look at it with optimism. We still have 9 days left for it to end.

These Janus words are also called auto-antonym, or a word that means the opposite of itself.  If I say, there are four people at a dinner party. By midnight, two people had left. How many people are left at the party?  No, it is not a Math question.

Here left means both “leave”  and “remain”
Another example of contronym is cleave.  Cleave can mean to split, to separate, and also to adhere closely, to stick.

The woodcutter swung the axe down hard in order to cleave the log into two even pieces.  Young beaver pups cleave to their mother in the water until they are strong enough to swim on their own.

Can we think of a few more contronyms while at it?

Nice wasn’t as nice as it is now.

As a teacher, I disliked the use of the word ‘ Nice’. I felt it was such a bland word, didn’t improve the vocabulary, and one of those lazy words you use when you don’t want to think.  I tell my students to think of  synonyms for ‘nice’ other than the favorite word of the millennial children- ‘awesome!”
It is believed that teachers in English-speaking countries often despair at the overuse of the adjective “nice” in their students’ writing. The term was originally a negative one, meaning “ignorant” or “foolish”.
Linguists track many possible origins of this word. It may have developed from the Old French version of ‘nice’ in the late 13th century or from the Latin ‘necius’. It’s thought that it slowly became positive over time because, once it was introduced into the English language, it was often used to refer to a person who was ludicrously over-dressed. Later, this was confused with a reference to something that is refined or to someone who was “nicely” dressed.  But then, whether it has negative meaning or not, it is better not to use nice. Instead, we can try a whole lot of amazing synonyms that would make our communication pleasant, agreeable, gratifying, delightful, satisfying, entertaining, amusing, wonderful, charming, and favorable. Google throws up some 125 synonyms for nice!
As a fact of the matter, I came across an article on why the word Nice should be banned from writing. Please do read at leisure and thank me nicely for it if you find it useful!
https://medium.com/@katie.ginger/why-you-should-ban-the-word-nice-from-your-writing-7038aee07b66
Sources:
https://www.dictionary.com/e/s/contronyms/#are-these-words-two-faced
https://www.ef.com/wwen/blog/language/english-words-with-strange-origins/
Photo credit:  https://pixabay.com/photos/january-sculpture-janus-sculpture-6771022/