Etymology is the study of the origin of words. Taking the weekly column forward we delve into the etymology of two very interesting words- Echo and Narcissus and how they came to be associated with personality disorders. 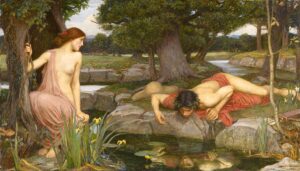 For the past few weeks, I have been enthralled in listening to Stephen Fry’s Mythos on Audible.

EKHO (Echo) was an Oreiad-nymph of Mount Kithairon (Cithaeron) in Boiotia.  She was blessed with a sweet voice and used it to prattle away.  She was like the village gossip, nosy neighbour but displayed no maliciousness in her babble.  Stephen Fry says of  Echo that anyone ‘with a mellifluous tongue would love to exercise it too!’  He adds that she was a romantic though sentimentalists might call her slushy, mushy and gushy but none could deny her goodness. One day Zeus, the God of Olympus was enjoying the company of one of the river nymphs when Hera his wife came to catch him out in the act.   She was waylaid by Echo who chattered on with inconsequential babble and led her away from Zeus.  Hera, mortified with herself for trying to catch her husband out returns only to realize that Echo had kept her away from Zeus with her senseless prattle.

The goddess Hera cursed her for preventing her from spying on one of Zeus’ amours.  She said that you would be able to speak only when spoken to and thus, Echo was rendered to repeating the words of the speaker. Once she lost her voice,  she became enamoured of Narkissos (Narcissus). She could not profess her love and moreover, she was scorned by the latter.  She was left unhappy and cursed.  Taking pity on her, Aphrodite the Greek goddess of sexual love and beauty, freed her of her physical body but could not lift Hera’s curse.  To this day we hear her voice in the woods, mountains, and any empty spaces.

Narcissus, in Greek mythology, is the son of the river god Cephissus and the nymph Liriope. He was distinguished for his beauty. Narcissus’s mother was told by the blind soothsayer Tiresias that he would have a long life, provided he never recognized himself. However, his rejection of the love of the nymph Echo or (in an earlier version) of the young man Ameinias drew upon him the vengeance of the gods. He fell in love with his own reflection and drooped over his reflection in the river. Lost he pined away. He was later released from his body and he was turned into daffodils. the flowers that bear his name, Narcissus pseudonarcissus, and they remain to this day bowed and nodding their heads by the river bed.

Both Echo and Narcissus have given rise to personality disorders like Echoism, Echolalia, and Narcissism

People with high levels of echoism may fear praise and actively reject attention. They make every effort to avoid burdening others and focus on meeting the needs of others to avoid considering their own.  Echolalia is the meaningless repetition of another person’s spoken words as a symptom of a psychiatric disorder.   They are considered to be the opposite of narcissism.  They constantly try to “prop up” those with more inflated egos in their life.

A narcissistic personality disorder is a mental condition in which people have an inflated sense of their own importance, a deep need for excessive attention and admiration, troubled relationships, and a lack of empathy for others. But behind this mask of extreme confidence lies a fragile self-esteem that’s vulnerable to the slightest criticism.