written by Chandrika R Krishnan March 13, 2022
This weekly column should have been up in the morning but then, I did what I do best!  Procrastinate.
Etymology is the study of the origin of words and taking this weekly column forward, I would like to speak about procrastination.
Etymologically, “procrastination” is derived from the Latin verb procrastinare — to put off until tomorrow. But it’s more than just voluntarily delaying. Procrastination is also derived from the ancient Greek word akrasia — doing something against our better judgment. 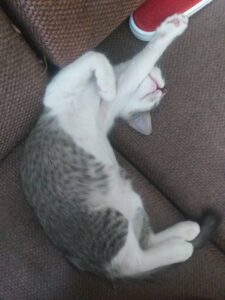 Uttam at his relaxing best- Photo credit Narayani V Manapadam.
Some common synonyms of procrastinating are dally, dawdle, delay, lag, and loiter. While all these words mean “to move or act slowly so as to fall behind,” to procrastinate implies blameworthy delay, especially through laziness or apathy.
A mythological metaphor for procrastination is attributed to the Greek hero Hercules. Hercules was assigned the seemingly impossible task of cleaning the Augean stables–where the droppings of hundreds of massive oxen had accumulated because the nasty task had been avoided for decades. Procrastination, when unchecked, creates one’s own personal Augean stable, as we have all have learnt at some point or the other.
Dr Tim Pychyl noticed the role of mood and emotions on procrastination with his very first work on the subject, back in the mid-1990s.  The Procrastination Research Group (PRG) began in 1995 when Dr. Pychyl completed his own doctoral work related to goal pursuit and subjective well-being.
Hence, procrastination isn’t a  character flaw or our inability to manage time, but often is our way of coping with challenging emotions and negative moods. The negative moods could be induced because of boredom, anxiety, insecurity, frustration, resentment, and self-doubt.
We tend to think of procrastination as a very modern phenomenon but then it is an ancient issue going by the stories that abound.
Perses, Brother of Hesiod: Your Standard Slacker (Approximately 700BC)
The ancient Greek poet Hesiod in his poem “Work and Days,” addresses his brother, Perses, who has squandered his inheritance and is looking to Hesiod to replenish his funds. Hesiod beseeches Perses to stop avoiding his duties:
Do not put your work off till to-morrow and the day after; for a sluggish worker does not fill his barn, nor one who puts off his work: industry makes work go well, but a man who puts off work is always at hand-grips with ruin.
In a series of speeches, the statesman Cicero tries to convince his allies to take up arms against his rival Mark Antony.   He warns against the harms of delay, calling procrastination “detestable in the conduct of most affairs.”  Despite his pleas, the members of the Senate procrastinated out of fear for the consequences.
Geoffrey Chaucer: A Quarter Done (14th Century)
In The Canterbury Tales, Chaucer has Dame Prudence advising Melibee and his friends, “…the goodness you may do this day, do it; and delay it not until the morrow.”
Procrastination rarely involves doing nothing, but many a time it is doing the wrong thing rather than the right.  So, I too did not sit idle. I completed watching a movie instead of writing this column!
Photo credit:
https://pixabay.com/vectors/bulb-business-graphic-cartoon-light-2029707/
“Procrastination: A Greek and Roman Tradition – SENTENTIAE ANTIQUAE” https://sententiaeantiquae.com/2017/12/05/procrastination-a-greek-and-roman-tradition/amp/
“Why You Procrastinate (It Has Nothing to Do With Self-Control) – The New York Times” https://www.nytimes.com/2019/03/25/smarter-living/why-you-procrastinate-it-has-nothing-to-do-with-self-control.html
“Procrastination Through the Ages: A Brief History of Wasting Time” https://www.mentalfloss.com/article/63887/procrastination-through-ages-brief-history-wasting-time
https://www.psychologytoday.com/us/blog/evil-deeds/200808/existential-and-mythological-perspectives-procrastination-response-dr-pychyls

So much yarn behind the two words, nevertheless, interesting 👌