written by Chandrika R Krishnan February 13, 2022
February 14th  is Valentine’s day when the whole world and his wife commemorate their love and the commercial and business establishment chuckle their way to the bank!
But how did it originate?   It originated as a Christian feast day honoring an early Christian martyr named Saint Valentine.  Saint Valentine was a Roman priest who performed weddings for soldiers forbidden to marry. Roman emperor decreed that married soldiers did not make good warriors and thus young men could not marry.  Saint Valentine wore a ring with a Cupid on it—a symbol of love—that helped soldiers recognize him. And, in a precursor to greeting cards, he handed out paper hearts to remind Christians of their love for God.  Because of this legend, St. Valentine became known as the patron saint of love. The Saint Valentine prayer asks Saint Valentine to connect lovers together, and the couple remembers their devotion to God.
Emperor Claudius II was against the marriage of soldiers and ordered that Saint Valentine should be beheaded. The execution happened on 14 February.
While the Saint Valentine story set the groundwork for establishing the day as a holiday for romantic love, what truly solidified the connection between Saint Valentine and love was a poem by medieval author Geoffrey Chaucer in 1381, which historians consider the origin of the “modern” celebration of Valentine’s Day, where we celebrate our romantic partnership with one other person.
A valentine is a sweetheart: specifically, someone who receives a greeting or attention on Valentine’s Day. … Asking “Will you be my Valentine?” is like asking “Will you go out with me?” and saying “I like you.” Sending a card is a common way to let someone know you want to be their valentine.
The focus has since been shifted and with the marketing thrust and advertisements galore. People say, ” Happy Valentine’s day” to all and sundry.

But, before we ask someone to be our valentine cupid should strike us.

He is a winged baby that carries a golden bow and arrows — is one of the most famous symbols of Valentine’s Day. His image, or sometimes one of a heart pierced by one of his arrows, is used to symbolize love. So how did a baby become such a big part of February 14th?

According to legend,  Cupid shoots magical gold-tipped arrows at gods and humans alike. By piercing their heart with an arrow, he causes individuals to fall deeply in love.

Some legends also say that Cupid is known to change his mind a lot. Not only does he carry golden arrows to make someone fall in love, but he also carries another kind of arrow. This other arrow has a blunt lead tip that makes people fall out of love.

During the 14th to 17th centuries, painters created many works of art that showed Cupid as a baby angel. This same version began to appear on Valentine’s Day cards during the late 1800s. Ever since the image of Cupid as a flying infant who inspires love has stuck in people’s minds. And it’s the version of Cupid that we are most familiar with to this day. 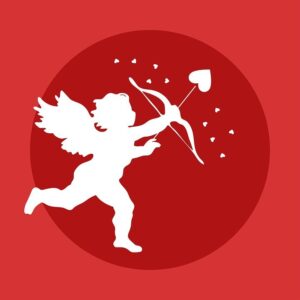 For those who feel that Valentine’s day is not just about romantic love and you can wish friends, parents, neighbors and et all; I guess you should wait till May 1st which is considered the Global Love Day.  It’s a day about giving love to yourself and spreading love out into the world.

Delving into Etymological Mystery- VIII- The world of Wordle