The term “Etymology” is the study of the origin of words.  The practice of etymology is uncovering the truth by tracing the root of a word.  Two recent events one tragic and one colorful is bringing the world of fashion to the forefront. The Cannes Film Festival underway and the dresses that the celebrities sport making more of a splash than the movies showcased.

The Kannada film young actress lost her life to the post surgical cosmetic surgery that she underwent to be at par with the fashion standards set by the abstract world of fashion.  She was one of the ‘fashion-victims.’

Hence, this  journey is to take you into the word of Fashion. Its synonyms can be chic, smart, modish, voguish, elegant.

The first records of the word fashion come from around 1300. It takes after the middle English fasoun borrowed from Anglo-French façun,  Latin factiōn. It means  “a making, company, party.

Fashion can be loosely defined as the prevailing style (as in dress or appearance) during a particular time. It is also for prevailing custom and its usage.

Fashion is supposed to have been invented by the modern fashion designer – Charles Frederick Worth. He was an English gentleman born in October 1825. This man is credited with two important ‘fashion firsts’ – he was the first to use live models, thus inventing the fashion show. Although Worth was not the first or only designer to organize his business in this way, his aggressive self-promotion earned him the titles “father of haute couture” and “the first couturier.” By the 1870s, Worth’s name frequently appeared in ordinary fashion magazines, spreading his fame to women beyond courtly circles.

His  House of Worth was immensely popular  among wealthy American patrons, as well as European royalty and aristocrats.

Shakespeare too had something to say about Fashion.  He wrote, “The fashion wears out more apparel than the man.”

The fashion industry is so huge that the revenue of the global apparel market was calculated to amount to some 1.5 trillion U.S. dollars in 2021 and is predicted to increase to approximately 2 trillion dollars by 2026. 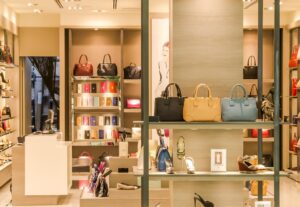