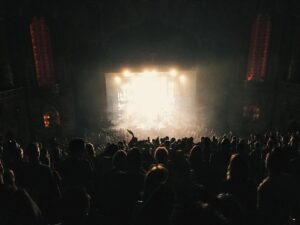 The applause was deafening and I took a deep bow enjoying being on the stage after a job well done. So pleasurable was the moment that I basked in the glory and absorbed the ‘feel-good factor.  I prepared myself for an encore and I knew that my shimmering outfit also added to the sparkle of the moment. My days prior to the performance were filled with the selection of songs, rehearsals, and countless other detailing that involved a stage performance. The performance itself was an anti-climax. It went by in a haze, but I thrived on the applause at the end of every song and I gave it my all for the next number. The flow of adrenaline was intoxicating. Today too like countless other days, there were people waiting to take my autograph and a selfie with me. I tried my best to be accommodative for I knew that my fan base determined how long I could sustain on stage.

“Wake up!  Time to get ready for school!”

I was shaken awake by my mother whose every sentence was an exclamation.

She reminded me that I had music class in the evening and I brightened up though a small part of me was filled with disquiet.   I worried about the disquiet like the cat does to the mouse. Besides music, I had another love- talking. So, to join the music class after school, I managed to get three of my pals interested enough to go to the class with me. So we strolled from the bus stop to the class getting something to munch at the corner bakery, which was a highlight of those days when eating out was sparse considering the limited spending power that each one of us wielded.

I knew that the music teacher was not too gung-ho with me and my group in the class though I have been trying to throw my voice about quite a bit.

I was just eleven and I knew I had quite a few years of religious practice ahead of me before my stage performance. Unfortunately, the music teacher knew that my tone-deaf voice could come in handy during an ‘evacuation’ process but definitely not for a singing career.

So guess, my dream of wanting to be a singer of repute had to die young with that song on my lip and music in my heart. When I belt out my version of the song during our long drives, it is the nerves of steel in my man that keep the car from veering.  I realized as I grew up that I was not only tone-deaf but also had problems remembering the lyrics.  That is indeed surprising considering that I deal with words. What? Did I not tell you that I love to hear my own voice and throw my voice around a bit. I turned into a teacher and my, my I never needed a microphone.  So, there! My voice did come in handy though the applause part remains unmet.

The very famous Indira Swaminathan, watched the three trudge in smug with whatever they had eaten at the corner bakery.  She sighed again. How does one tell the three young lasses whose enthusiasm clearly made up for their lack of talent in the singing arena that there was no hope for them? It went against her grain as a teacher of repute. How is it possible not to be able to help children who wanted to hone their talents? She sighed deeply thinking shame-facedly that there lay the problem. There was no modicum of talent in those three; leave alone honing them.  She also wasn’t too far wrong in thinking that the eating out might be one of the reasons for their chirpiness.

She watched them walk in after removing their shoes and settling down after taking out their notebooks. The shorter one showed the most promise though her voice needed to be trained to sound less like a mouse caught under the door.  The tallest among them had no chance in hell as her voice was deep, hoarse, and guttural. Each time she went Sa, Ri, Ga, Ma, the little room shook. The chinky-eyed could not hold a tune even if her life depended on it. She never was to learn that she could never get to remember the lyrics too though her profession was dealing with words.

Indira, with twenty years of experience behind her, squared her shoulders and told herself that she would try and take this up as a challenge and give it a try for a month more. She felt duty-bound particularly when the three had come on the auspicious day of Vijayadasami with a platter of fruit, betel leaves, and all that which was given to their Gurus for a propitious beginning. She felt guilty that she was so not looking forward to Tuesday and Thursday.

She began, “You three have to gargle saltwater, every day. It will clear your throat. After that half an hour of practice.”

“Can we practice evening,” the official, chinky-eyed spokesperson asked.

Ideally, you should practice at all times, Indira thought quite waspishly but felt ashamed of having such uncharitable thoughts for eleven-year-olds. She toned down her own voice and said, “If you three are really keen to learn, you all should put more than double the efforts.” Looking at the woebegone faces, she said, “Any art should be started young.  With practice, you overcome the lost time. Okay? ” At their nod, she began, “ Sa..ri..ga..ma.”

“ Let’s try again. Listen to me and set your pitch low..it goes up and then comes down.

After ten tries, the tired trio left. Indira sighed again over a refreshing, strong coffee. She wondered if they would be back. She hoped not and blessed them for their future glory though definitely not in the singing line.

Photo by Jason Rosewell on Unsplash

I Will be There for You- Flash Fiction

A lifetime within one – Drabble

Spare me the Guilt Trip