This mantra addresses all the nine planets of astrology name and seeks the blessing of all planets. How then did they get the names?  The Sun was held as atman and the Moon was held as the manas, the first name given to the weekday from the Sun, e.g. Aditya. The next day was named after the Moon, e.g. Soma. So, the Ravi was the Samskrit word for Sun, and vāsaraha meant day. So we have Ravivāsaraha ( Sunday).  Hence, the Hindi version for the rest of the week is Somavār ( Monday), Mangalavār( Mars), Budhavār ( Mercury), Guruvār (Jupiter)Shukravār ( Venus) Shanivār ( Saturn)   Rahu and Ketu are the ascending and descending node of the moon.  Barring a few variations, the same holds true for most Indian languages. 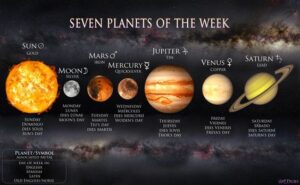 Why then did the Romans name the days of the week after their gods’ names for the planets? Because they saw a connection between their gods and the changing face of the nighttime sky. The ones they were able to see in the sky each night were Mercury, Venus, Mars, Jupiter, and Saturn. Those five planets plus the moon and sun made seven major astronomical bodies so it was natural to use these seven names when the seven-day week arrived.  Germanic had a heavy influence on English and hence the days of the week were an amalgamation of all languages.

The first day of the week was named after the sun – dies Solis – day of the sun in Latin and later Sunnon-dagaz in old Germanic. It’s easy to see where the English word Sunday comes from here.

Whereas most English days of the week retain their associations with the Roman gods, some were substituted for the names of the equivalent Germanic gods, because English is a Germanic language.

Similarly, the Germanic equivalent of the Roman god Mercury was equally as swift and he was called Woden. And so this day, which started out in Latin as dies Mercurii became Woden’s day in old Germanic, eventually becoming Wednesday in English.

Jupiter, also known as Jove, is the supreme Roman god and patron of the Roman state. He is the god that created thunder and lightning. Thor is the Norse god of thunder, often shown riding through the sky in a chariot. And it’s from this Norse god that we see the Latin dies Jovis (day of Jupiter) become Thor’s day and eventually Thursday.

We end with an easy one. Saturn is the Roman god of agriculture, known in Ancient Greece as Cronos. In Latin we have dies Saturni and it’s not hard to see that Saturday today is still very much Saturn’s day.

Very interesting. How our Navagraha sloka that we normally chant while circumambulating the Navagraha in the temple match up with the origin of the Days of the Week

How wonderful this is. So insightful

Interesting and quite informative.