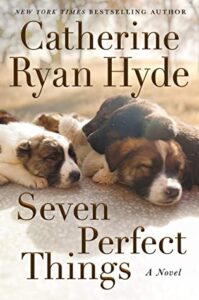 It was just by chance that I stumbled upon this book. Maybe, it was the cover of two adorable puppies. I am not a dog-lover, but am I ever so glad that I picked it up!
I am not going to give out spoilers. Suffice it to say that it is a story of a thirteen-year-old named Abby who saves seven puppies. This is a story of how she learnt to take care of all seven of them. Of course, you have a fabulous man going by the name of Eliot and Abby’s mother, Mary. I wouldn’t want to write much about Abby’s father! You need to read the book to know him.
The antics of the puppies take up much of the book, and I wouldn’t want my children to read this for the one major grouse they have against me is that I refused to be a pet mom. But then I am made of sterner stuff.
I believe that every book is out there to teach you something, and it needn’t necessarily be from a heavy tome. It can also be from a sweet and heart-warming tale. It is the same with this book too.
My learnings from the book, and it is not in any particular order, are:
When Eliot mused, “I just think it’s odd how we parse out our empathy. Why do we only have empathy for those who remind us most of ourselves?”
I had to take a pause and think? I also, like Eliot, felt it would be nicer if we developed our ’empathy muscle.’ As I pondered, I  realized that it is easier to empathize with someone who is just like us. We hardly spend time thinking of or walking in the shoes of those so very different from us, isn’t it so?
Another place the story resonated with me is an observation that we allow people to “abuse us as much as we’re willing to abuse ourselves. But once they start treating us worse than we treat ourselves, then we know they have to go.”
Gaslighting is one of the angles explored in the story. When someone makes it always our fault when they do something mean. Always making you feel like you don’t really see what you see. And made to question your feelings. Feelings aren’t really right or wrong. They just are what they are. As Eliot says, “You’ve been living with him so long. You know him better than anybody. If you think you have reason to be scared of him, you probably do. It is always better to believe your fear rather than argue with it.”

Isn’t the above so profound? How many times have we tried to second-guess ourselves in our life’s journey?

Sometime during the story,  Eliot loses his wife, Pat, to a long-drawn disease. He has people coming and saying inane things like the dead person is in a better place or her release is a blessing. He says, “please do not come to somebody whose wife just died and say it’s a blessing. I’m sorry. You just don’t. I can see if you’d said, ‘It’s a tragedy, but it could have been an even more heartbreaking one. So for that one tiny little saving grace, we can be grateful.’ But don’t try to tell me the worst time of my entire life is a blessing.”
As I read that, I realized that I too have been guilty of saying that the dead person is in a better place, and we are yet to learn the art of offering condolences. Eliot feels that people do try to fix grief. They try to solve it in a couple of sentences which is ridiculous for it never solves anything. He later laments to his best friend, “I don’t understand why people can’t just join you in your grief for a moment.”
It was a learning for me, and I wondered if I too had tried to fix grief. As Eliot stands on the welcome mat after the funeral, he aptly puts it, “the really tough bit is when you find yourself dropped on the other side, and you have to find a way for your life to go forward from there.”
So, my recommendation is you do read this book. Maybe, you will come up with many such gems that resonate with you as you play with those cute puppies.
This book will not make your heart pound but leave a pleasant and warm feeling around it as it beats gently.

Delving into the Historical Mystery- Part XIV. An etymological study

The Pause by Monica Singh- A book Review