“Etymology” is the study of the origin of words and the word etymology itself derives from the Greek word etumos, meaning “true.” The practice of etymology is uncovering the truth by tracing the root of a word.

Russia- Ukraine war is going on for almost a month now, and closer home there has been a lot of discussion around the movie, The Kashmir Files.   So, this week I am taking you into the journey of Disaster and Exodus.

Eris is known as the Greek Goddess of Strife, discord, and chaos.  Her Roman equivalent is Discordia, which means the same.  She functions essentially as a personification and she appears in Homer and many later works.

The dictionary meaning of disaster is “anything that befalls of ruinous or distressing nature; any unfortunate event. ”  The word itself is taken from the French désastre and Italian disastro. They literally mean “ill-starred,” from dis-, here merely derogatory, equivalent to English mis- “ill” (see dis-) + astro “star, planet,” from Latin astrum.

The origin of the word points to unfavourable events being blamed on certain planet positions. Destiny is written in the stars and hence fixed and inevitable.

But then, are the collective fate of Ukrainians, the common Russians, and the Kashmiri Pandits bad?  Whatever be the reason behind the war or discrimination against a particular race, sect, or religion, the fact remains that it is the common people who suffer for the mistakes of others.  So we move on to the other word – Exodus.

The word is from the Greek Exodos which literally means road out. 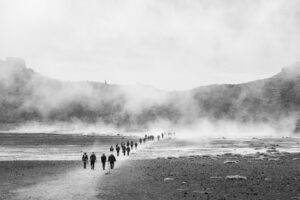 The Biblical book of Exodus describes the departure of the Israelites from Egypt, so it’s no surprise that the word has come to refer more generally to any mass departure. The word itself was adopted into English (via Latin) from Greek Exodos, which literally means “the road out.” The Greek word was formed by combining the prefix ex- (meaning “out of”) and hodos, “road” or “way.”

We spend sleepless nights on days when we have lost our wallets or misplaced important papers but then exodus involves leaving behind their possessions, homes, memories, and many more and embracing uncertainty, squalor in camps, disease, sickness, and PTSD all because of a power struggle among the few.

The recent exodus of the Ukrainians has been heart-wrenching leaving behind the lives that they had carefully built. UN  estimates 3.2 million refugees have already fled the country and 6.5m displaced inside Ukraine. In January 1990, there had been a mass exodus of Kashmiri Pandits to the tune of approximately 150,000.   Since 2011, over half of Syria’s pre-war population of 22 million has been forced to flee their homes. During the partition of India- Pakistan the journey of those caught in the cross-fire and forced to leave their homes is the basis for many stories and movies.

Is it too much to expect for peace and happy living?

Photo by Sébastien Goldberg on Unsplash

Delving into the Historical Mystery- Part XIII- An etymological study