Rewriting My Happily Ever After by Dr. Ranjani Rao 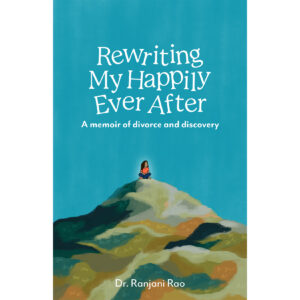 Divorce is a word that conjures the image of two individuals baring their fangs at each other. Ugly with custody battle if there is a child involved; we have heard stories of quite a bit of mud-slinging and “he said..she said,” scenarios.

But here is a personal account of Dr. Ranjani Rao’s book ‘Rewriting my Happily Ever After’. This story is honest, raw, and poignant, yet not shrill. Beginning each chapter of her journey with an amazingly apt quote, I couldn’t bring myself to hurry through her book. I was like a cow chewing the cud and ruminating and collect some amazing quotes in the process.
Despite her obvious struggle of self-doubt, loneliness, and trying to handle all duties and responsibilities of a single, working mother, she takes time for self-care as she takes a leaf from the poet Maggie Smith’s “beauty emergency” to describe moments when you have to stop everything and look. As I flipped through the pages my respect for Ranjani only grew for she refused to use her daughter as a pawn against her husband. She says candidly, ‘He was the fun dad, I was the dull mom. The strict mom. The all-business mom. I knew that Shreya needed both of us because we were so different.’
When she wrote, ‘A large part of my childhood had been about doing things because it was expected, not because I wanted to do it. From being on my best behavior to please parents to being diligent at school to impress teachers, life had been a series of keeping up appearances,’ she was speaking for an entire generation. Entering an arranged marriage and trying to give it all, was also keeping in line with expectations.
I was left moist-eyed when she wrote about the day the divorce after nineteen years of marriage was final. ‘It
was a day filled with relief and grief in equal measure. I mourned for the fact that we would not create memories together. I rejoiced for the fact that we would not create more memories together.’
When she ended her memoir with,

‘Like a child building a brand new toy with a heap of Lego blocks, I reassembled the useful pieces from the debris of my old life with patience, persistence, and a strong belief that a better life was possible. In doing so, I was able to reveal a new avatar of myself,’ I couldn’t but cheer the woman who emerged from the experience of a soured marriage but did not allow the experience to sour her life. There had been lots of factors that had helped her in this journey of hers, but what remained with me besides not accepting the words of another as her own personal truth, were her words when she goes an extra mile to help her colleague, ‘I had put aside my burden at least for a moment. I had seen another’s pain. And that had made all the difference.’ She further adds a quote from Paulo Coelho to drive home the point, You drown not by falling into a river but by staying submerged in it.

The honesty with which she had penned the memoir was a revelation by itself. It is also reflective of most of us when we are handling difficult situations in our own life.  At one point, she ruminates, ‘I had lost the anonymity that comes with conformity. It was humbling to realize that I was being myopic and as judgemental as everyone I liked to accuse. It was me who had labeled my situation as being non-conforming and therefore an object of curiosity.’  At another juncture, she says,  ‘Like an intermission during a long movie, I was waiting for my “real” life to resume. I had never penciled in such a detour in any list I had made for my life. ‘

I would strongly recommend this book to everyone who is undertaking this journey called life for if not for anything else, to learn from the quotes!

The Pause by Monica Singh- A book Review