The world of printed wordsThe World of Printed Words 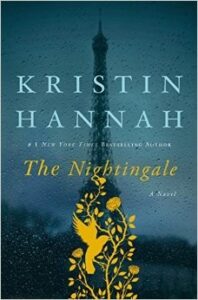 This book came highly recommended by my friend and I must say I am not disappointed.
I love the narrator’s voice at the beginning which says:
If I have learned anything in this long life of mine, it is this. In love we find out who we want to be; in war, we find out who we are. We understand the value of forgetting, the lure of reinvention.
As soon as I read it, I was hooked.  The reader does not get to know who the narrator is except for the fact that she is dying of cancer and her son wants her to move in with him.
I liked the language, the tone, and certain gems like, My son loves a version of me that is incomplete. ( This resonated with me so much for most of our loved ones don’t know us beyond the role we play in their lives) . I also liked the way the author juxtaposes three chapters of the first-person narration along with the story told predominantly in the third person.
It is a story of two sisters, Vianne and Isabel.  Their father comes back a changed man after the first world war.  The mother tries to keep the family together but somewhere they become dysfunctional after her death.  The story begins with  Vianne’s husband finding himself conscripted and once again a generation of men were going off to war again. A postman finds himself a soldier overnight and does he have a choice?
As Vianne and her daughter, Sophie bids farewell to her husband, she realizes that the words, ‘I love you,  which usually sounds big words feel small now.
The author very deftly delineates the character of the two sisters: Vianne who keeps saying that war would end soon for she just doesn’t want to think of the alternative and Isabelle, who is impetuous, having a tempestuous relationship with both her father and sister is forced to stay with her sister once the war begins.
While Vianne tries to retain as much normalcy in the town of Carriveau in France as she can for her daughter Sophie,  Isabelle starts to help in the war.  She starts with distributing pamphlets stealthily.  Isabelle starts helping the downed airmen by escorting them over the Pyrenees at great personal hardships and courage, she earns the sobriquet, The Nightingale. Germans do not suspect a young eighteen-year-old and hence she is able to help many soldiers get a safe passage out of occupied France.
Vianne finds her home being used by the Germans for billeting.  Vianne helps the German by giving the name of her best friend Rachel who is a Jew and realizes her folly when they start targeting them. Unfortunately, Rachel is taken away to the camp and she loses her daughter to the shooting but   Vianne takes care of the young son of Rachel passing him off as her nephew from Nice.
As the story proceeds, Vianne comes on her own and despite facing personal horror of her own, she helps many children of the Jew and hides them in the seminary.   She kills the German soldier when he tries to attack Isabelle.
Despite the racy read, the book has its drawbacks.  The horrors Vianne faces in the hands of the SS soldier is not as horrifying as it should be thanks to the tepid description.   Despite, heavy rationing too much importance is given to cooking and food.  Isabelle is described as impetuous one too many times.  Stealing the cycle of a German soldier is not that easy.

Irrespective of such follies, what stood out is the sheer ability of the human being to survive the odds. Isabelle is arrested and faces the concentration camp and yet stands tall despite the horror she faces or sees. It also reflects how common men and women did not allow their fears to better them.

We come to know who the narrator is by the end of the book ( I wouldn’t want to play  the spoilsport here) and once more the gems stood out when she says:
I belong to a generation that didn’t expect to be protected from every danger.  He fills space with words and he chooses them carefully.
At the end of the book, when the survivors meet in Paris for commemorating the brave ones during the war,  I cannot but salute the brave generation that managed to overcome all odds and continue to be horrified how low can human depravity be reduced to when you read the account of the concentration camps.

A smattering of Spice

Spare me the Guilt Trip

The Funny Side of It by Radhika Acharya

The Queen of Suspense

My world of Printed words