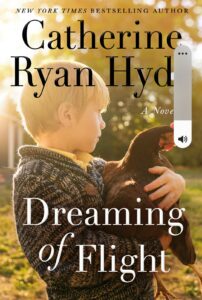 Catherine Ryan Hyde’s Dreaming of Flight was a bit slow moving for my taste yet, I found the learnings  therewith so interesting I plodded on.

The story is about a young boy Stewie who faces a lot of loss in his young life. He lives with his physically challenged brother Theo, and a sister Stacey who takes care of the household besides being a nurse. Stewie is sensitive, takes a hen’s sickness too personally, ‘wants to ‘fix things.’ He is proud of his grandma’s hens and delivers fresh eggs to people before he goes to school. An unlikely friendship develops between him and an older, forgetful woman who calls herself Marilyn but she is actually Jean Clements, who runs away from a senior home because she wants to remain in her own home. It is a story about relationship and how people , young and old need people to stave off loneliness.

I found the author’s three other books more interesting than this but some of the quotes that I particularly liked which resonated with me are:

People are forever feeling like everything in their life is wrong, but somehow in a minute they’ll turn a corner and everything will be right. But it’s never that way. Life is never all good or all bad. It’s always a trade-off deal. It’s always ‘something is lost, but something else is gained.”

Coming to grief, the following quote resonated with me.

“I’m positive. I know all about grief. I know it takes longer than most people want to believe. I know you’ll still be feeling it after everybody else has decided it’s time to move on. It’s not a straight line. People think it gets a little better every day. But it doesn’t. It doesn’t go in only one direction like that. You’ll go along for a couple of days thinking you feel better. Thinking you’re able to cope a bit more. And then some little thing happens, or maybe nothing at all, and it comes back around. And you get dropped right down into a big pit of it again, maybe without even knowing why. It seems to go in cycles instead of in one straight line. Now do you know what I mean?”

When Stewie wants to fix things, he is told by Marilyn, “I suppose . . . that it’s more appropriate to put that kind of caring in with someone while they’re alive. After they’re gone you might feel devastated, but if you don’t get back to your own life, you’re doing that for yourself, not for them. They’re gone. It’s too late to show you care. Do you understand what I mean by that?”

“I’m happier when I’m not talking about Gam dying,” Stewie tells Stacey, careful not to look over at her. “Why even do it, then?”

She answers , “Because things hurt us even when we’re not talking about them. Even when we’re not paying attention to them. We think we’re getting away with not feeling it. And we think that when something feels painful, it’s better not to feel it at all. But it’s almost like . . . if you had drunk poison, or eaten something that was spoiled. You might want to resist throwing it up, because that’s such an icky process. And because maybe we associate throwing up with being sick. But why hold on to something if it’s hurting you? Especially if you could feel better by getting it up and out. It’s better for you in the long run. More likely to lead to your being happier.”

At another place , readers come across,

“The reason people are unhappy is because they’re so sure they know what they want. And then it makes them unhappy when they don’t get it. I personally think people would be happier if they weren’t so sure they knew the difference between a good thing and a bad thing.”

Stewie is told by his psychiatrist who learns to trust, ” Sometimes the people around you will have problems, and you’ll wish they didn’t, but there won’t be anything you can do. You just have to trust them to get by as best they can. If you can change it, that’s great. You go ahead and change it. But if you can’t change it, and you can’t accept it, it just gets so exhausting.”

As the story proceeds, Stewie realizes that,
“somebody was always trying to convince you of something when they were barely sure about the thing themselves.”

Stewie is one exasperatingly, adorable character who people look forward to meeting.