My ReviewsSome Learnings, Some TeachingsThe world of printed wordsThe World of Printed Words 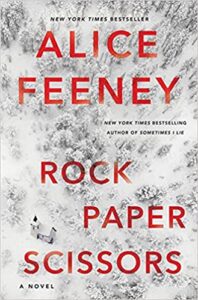 One of the best thrillers I read in December 2022 was Rock, Paper Scissors. This game came in handy during our school days.  It was a refreshing concept when a couple plays this game in the story more so to decide when there is a stalemate.

The story begins with a road journey where Amelia and Adam are driving to a remote holiday home in Scotland in the midst of snow and cold to spend a weekend together.  Their marriage counselor does suggest a weekend away, and Adam- a screenwriter, asks the counselor,  “Can a weekend away save a marriage?”  The story’s premise is that everyone has secrets and marriages don’t fail, but people do.

Adam has a neurological glitch called Prosopagnosia, where he cannot distinguish features on faces, including his own. This makes the story all the more interesting.  Adam is not happy with the journey for various reasons, which we get to gather as the book progresses, and the voices we hear in the beginning are Amelia and Adam’s. The weekend does not turn the way Amelia and Adam envisage, and the book turns a page-turner at every step, with the reader taken in by surprise by the end of the book. We are also introduced to a new voice – Robin’s and letters that mark each year of the first decade of their marriage.

I grew up with a steady diet of Reader’s Digest, and one of my favourite columns was “It Pays to Increase your Word Power.” Hence, this book was all the more special, with the new words introduced every few pages in a letter written by the wife to Adam but with no intention of letting him read.  The letter symbolizes what each year in the marriage means to them, along with the word of the year.

The first year of the marriage is symbolic of Rock, and for the word of the year, we have Limerence .  This noun depicts an involuntary state of mind caused by a romantic attraction to another person combined with an overwhelming, obsessive need to have one’s feelings reciprocated.

The word of the day starts as a joke between them.   Through the book, we get introduced to the word of the year and learn about the nuances of their marriage from the unsent letters.  The symbolic gifts they exchange say a lot about the characters.

The second year symbolizes paper and the word is Shenanigans – secret or dishonest activity or maneuvering.  One of the evocative lines in this letter was the statement,  Getting married costs a pretty penny, and pennies are prettiest when you don’t have many of them.  This indeed gives a pause at this uncomfortable truth.

The third year is symbolized by cotton, and the word of the year was: Growlery– a place of refuge or sanctuary for use while one is feeling out of sorts—a private room or den to growl in.

The fourth year symbolizes leather, and the word of the year was: Bibiloklept, a  noun to denote someone who steals stories. A book thief.

The next year is symbolized by Linen, and the word we get to learn is Hornswoggle, a verb that denotes getting the better of someone by cheating or deception. Here we get another peek at the letter writer when she finds writing letters that Adam would never read cathartic.

The following year is symbolized by wood, and the word of the year is Mensch a noun that means a good person. Someone who is kind and acts with integrity and honour.

The following year is symbolized by Iron, and the word of the year is chuffed, an adjective for feeling happy or very pleased.  We get to know from the letter that she gifts Adam with an iron key and wants to tell him the truth, but then she wonders, why ruin the present or jeopardize the future with my past?

The next year is symbolized by copper and the word of the year is – Discombobulated an adjective for being confused or disconnected.

The following year is symbolized by Bronze, and the word we get to learn is Atelophobia, a noun that denotes the fear of not doing something right or the fear of not being good enough.    It often translates to extreme anxiety for not being perfect enough.

The following year it is Pottery, and the word of the year is Monachopsis, a noun that depicts the subtle but persistent feeling of being out of place. Unable to recognize your intended habitat, never feeling as though you are at home. Another sentence that stood out here was,  I felt a mix of relief and excitement when the doorbell rang and saved us from ourselves

The tenth year is symbolized by Tin, and the word of the year is Metanoia, a noun that reflects a transformative change of heart. The journey of changing one’s mind, self, or way of life.

What would have been the eleventh year of their marriage is symbolized by Steel, and the word of the year is insouciant an adjective that reflects someone free from worry, concern, or anxiety. In other words – carefree.

What would have been the twelfth anniversary is symbolized by silk, and the word of the year is redamancy a noun for the act of loving the one who loves you, a love returned in full.  This is the first letter Adam is allowed to read.

As the book proceeds through the letters and the voices of the three main characters, we are let into a world of lies, deceit, and untruths.  As one of them says, Maybe all marriages have secrets, and maybe the only way to stay married is to keep them.

When the book ends with scissors, we learn Schadenfreude, a noun for pleasure, joy, or self-satisfaction derived by someone from another’s misfortune.

I find each and every book gives us some form of learning or the other. Being a writer, I could not help feeling a little envious that I did not think of many sentences first, and I quote just one of them:

In public, he was a brilliant writer, but in real life, he was a collection of unfinished sentences.

To summarize the book I would like to take the thought of Robin when she says, Life is like a game where pawns can become queens, but not everyone knows how to play. Some remain pawns their whole lives because they never learned to make the right moves. This is just the beginning.  nobody has played their cards yet because they didn’t know they were being dealt.

The Blue Bar, A book by Damyanti Biswas – A book Review